Sundays at 10 returns via Zoom

Peace be with you

Thank you from the Girls’ Brigade 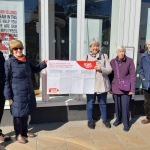 Perhaps, by casting your mind back to the spring of 2019, you may remember when members of Queensferry Parish Church were given the opportunity to sign a petition on behalf of Christian Aid asking HSBC to make the Big Shift out of fossil fuels. In particular we asked them to close a loophole allowing the bank to fund coal power in Bangladesh, Indonesia and Vietnam, countries that are already suffering from climate change in rising sea levels and flooding. During Lent in 2019 Lesley & Craig MacKenzie, Janet Thomas and Tom and Gwenneth Williamson paid a visit to the HSBC bank on Princes Street to hand in this petition and a personal letter to the CEO of the bank. In addition 30 000 emails and 7000 postcards were sent to the bank from CA and environmental organisations like Friends of the Earth.
At their AGM on 24th April 2020, HSBC announced they were closing this loophole.
It may have taken some time, but this is a real success for Christian Aid and good news for climate justice.